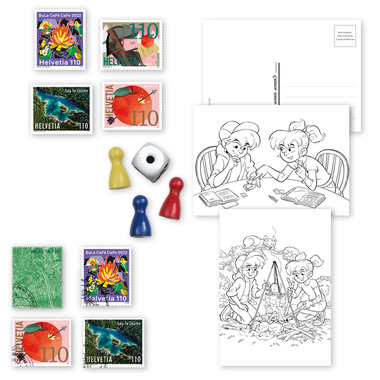 Other products of Phila and Franco

The new issue of the stamp set for children provides inspiration, with a series of exciting, humorous and sometimes informative contributions. There are occasional references to the Guide and Scout movement. The reason is the issue of a special stamp to mark the Swiss Guide and Scout Movement National Jamboree, which takes place in Valais this year. Phila and Franco have obviously not been overlooked, either. They will visit the camp themselves, even if the weather is bad, which it looks as though it may be …

The special stamp is of course part of the set. Also included is William Tell with the Pierced apple stamp, as well as various others, both cancelled and uncancelled. As always, there’s plenty of information about stamp collecting – all you need to know about “trading”, for example, but also fascinating insights into some of the most valuable stamps in Switzerland.

Children will find an introduction to writing letters and postcards with lots of examples, including a thank-you letter to relatives or birthday cards, with useful advice on creative writing, too. There are also craft instructions, puzzles, games, postcards to colour in and paint and lots more besides.

The stamp set for children is available at the Postshop and from Swiss Post branches as a single issue for 12 francs or at a discounted rate on subscription at swisspost.ch/stamp-subscriptions.