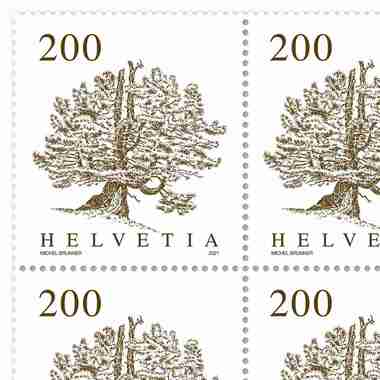 Other products of Trees

Trees can become quite ancient, often serving as companions to generations of people in the areas where they grow. Four of these living witnesses of time are honoured in a special stamp set. In keeping with the theme, the style is reminiscent of old engravings. The 900-year-old larch shown on the 85-centime stamp can be found in Valais, beneath the Dent de Nendaz, at an altitude of around 2,000 metres. Its shape is typical of old larches: behind a thick trunk, a splendid umbel grows towards the valley, protected against rockfall. The gnarled oak on the 1-franc stamp is not quite so old. It is located to the south of Delsberg and is called “Chêne des Bosses” – presumably because of its distinctive bumps. The tree is around 430 years old and has grown in a distinctive, unusual shape typical of solitary oaks. Its trunk is nine metres in circumference. The trunk of one of the mightiest sycamores in the world is almost ten metres thick. The subject of the 150-centime stamp took root at an altitude of 1,200 metres, below the Stanserhorn. Despite the steep slope, the tree appears to have thrived in the open meadow for half a millennium. The special stamp with a value of two francs depicts a particularly rugged Swiss stone pine which settled 450 years ago on a small hill at around 2,000 metres above sea level – and even enjoys a view of the north face of the Eiger. Swiss stone pines have a viscous sap in their evergreen needles which provides protection against frost. To enhance the intricacy of his illustrations, the designer avoided using too many colours, shades or environmental structures and opted for simplified images. This focuses the eye entirely on the trees, which provide more than enough detail with their many facets. Broken colours were used to highlight the simplicity.