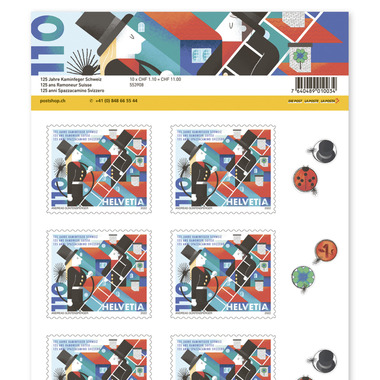 This year, the Chimney Sweeper Switzerland association is celebrating its 125th anniversary. The special stamp issued to mark the occasion features a scratch-off coating: the sender or recipient can clean the chimney on the stamp! A master chimney sweepers’ association was founded as a cooperative back in 1897, but it was disbanded shortly afterwards. The association that exists to the present day was later founded in 1917. The work performed by chimney sweepers – 30 percent of whom are women – helps to protect the environment, ensure fire safety and improve air quality. The special stamp is an illustration of a woman and a man in traditional costume with the typical tools of the trade. The chimneys that can be seen on the rooftops are grey but can be scratched clean. The clover leaf brings luck on the roofs – with or without soot. The sheet also contains self-adhesive lucky charms. In addition to the chimney sweeper’s top hat, the charms also include a ladybird, a 1-centime coin and a four-leaf clover. As long ago as the Middle Ages, chimney sweepers were seen as bringers of good fortune, because they protected people from poisoning and fire by unblocking their chimneys. They also evidently had no fear of dark chimneys, where spectres were believed to live. Touching a chimney sweeper was believed to bring good luck in the New Year.