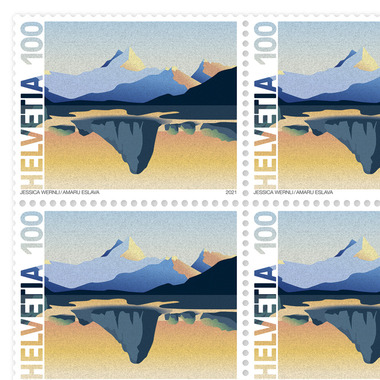 Other products of Joint issue Switzerland–Thailand

King Chulalongkorn (Rama V) laid the foundation for the strong relations between Switzerland and Thailand, which are based on trade and tourism. King Rama V was the great-grandfather of the current monarch Rama X, whose name is Maha Vajiralongkorn Phra Vajiraklaochaoyuhua. Relations between Thailand and Switzerland date back to the 17th century, when missionaries from Fribourg travelled to the country that was then known as Siam. However, relations were only firmly established during the late 19th and early 20th centuries, thanks to King Rama V’s visits to Europe. In 1931, the two countries signed a friendship and trade agreement – which means that Switzerland is celebrating 90 years of diplomatic relations with Thailand in 2021. Tribute is paid to these relations through the illustrative depiction of two magnificent water landscapes, where each is reflected in the other. Featured are the viewpoint of Samed Nang Chee (or Samet Nangshe) overlooking Phang Nga Bay in southern Thailand and Lake Bachalp up above Grindelwald. It is not just the reflections that are remarkable, but also the fact that the sun is rising over the Thai bay and setting over the Swiss mountain lake, symbolizing the time difference. The 100-centime stamp, which can be used in Switzerland, features the Swiss lake, while the 200-centime stamp showing the Thai bay can be used internationally.