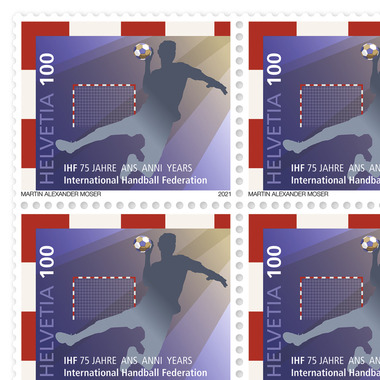 The International Handball Federation (IHF), the global governing body for indoor, beach and wheelchair handball, was founded on 12 July 1946 and is celebrating its 75th anniversary in 2021. The special stamp illustrates the work done by the IHF from its headquarters in Basel to promote the dynamic, popular and exciting team sport. The blue and gold of the court and the hand holding the ball pay tribute to the IHF’s colours, while a red and white handball goal can be seen in the background. A player jumping is shown in the spotlight, highlighting the sport’s dynamic nature. Originally played outdoors with teams of 11 versus 11, each side is now made up of seven players for the indoor game and four for the beach game. In terms of the number of admission tickets sold, handball was the second biggest sport at the 2016 Olympic Games in Rio. In 2018, beach handball made its Olympic debut at the Youth Olympic Games in Buenos Aires. With six continental confederations and 209 national associations, the IHF is one of the biggest sporting federations recognized by the International Olympic Committee.