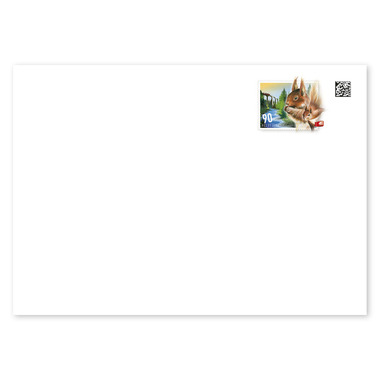 Pre-franked envelopes B Mail 0.90 without window

Other products of Pre-franked envelopes

Deliverable to: Switzerland and Liechtenstein

Pre-franked envelopes are extremely handy and lighten the workload for both business and private customers. These envelopes have been adapted to the new face values and continue the tradition of wonderful images of animals typically found in Switzerland. The designs are once again in harmony with nature – whether it’s cows raised as livestock or squirrels and swans living in the wild. They are all depicted with a young animal, which will hopefully warm the heart. Featured on the 90-centime face value, the squirrel is a popular figure. Its habitat is not just recreational spaces, but often also commercial or protected forests. The fern, a plant that together with other primordial plants formed huge forests 360 to 300 million years ago, was selected as a symbol. Face value of 1.10 francs: the cow – for Swiss people, at least – is also a popular animal and one that’s symbolic of Switzerland. The landscape represents appreciation for biodiversity, as do the meadow flowers, which provide food for insects, livestock and wild animals. The franking of 2.10 francs depicts the elegant swan in splendid white, set against wonderful lake scenery. The fossil depicted is a testament to the creation of Switzerland’s mountains. The spiral is also a symbol of change and development.