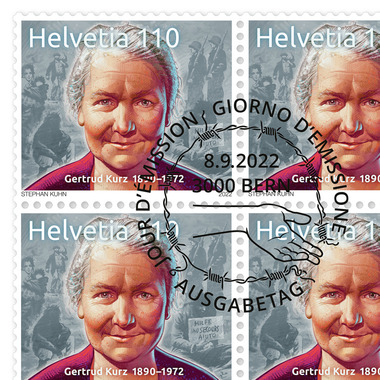 To mark the 50th anniversary of her death, Swiss Post is paying tribute to a woman who will forever be a part of Swiss history: Gertrud Kurz (1890–1972). The goal of this special stamp is to once again acknowledge her commitment – in particular given that the issue of aid to refugees has lost none of its urgency or relevance today. This woman, who described herself as a “simple housewife”, became a member of the international “Kreuzritter” (Crusaders) peace movement in 1930. During the Second World War, Gertrud Kurz fought for a more humane refugee policy in Switzerland, because – despite the authorities’ knowledge of the mass murder of Jews – the requirements for the asylum system had been made more stringent. Born in Appenzell but living in Bern at the time, her persistence was rewarded in August 1942 when she found a sympathetic ear in the form of Federal Councillor Eduard von Steiger – at a time, lest we forget, when she herself did not even have the right to vote. As a result, the national border, where according to the Bergier Report around 24,000 refugees had been turned away at the height of the Second World War, was at least partially opened. In 1958, Gertrud Kurz became the first woman ever to receive an honorary doctorate from the Theological Faculty of the University of Zurich. The central element in the design of the stamp is a portrait of Gertrud Kurz. It is flanked by refugees to the left and border guards at the top right. A homeless person can be seen at the bottom right, representing all of the varying sections of the population who were helped by Gertrud Kurz.