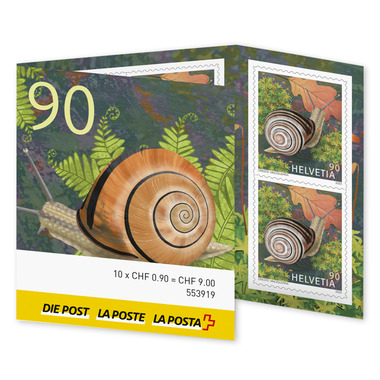 Other products of Animals in their habitats

Every child knows that most birds build nests and that foxes can hide down their holes. But how does a family of common kingfishers live? And what exactly does the inside of a bee nest look like? The “Animals in their habitats” special stamps feature the homes of four remarkable species. The first depicts the brown-lipped snail, which carries its home around on its back and can be seen crawling at a leisurely pace over mossy terrain. It adorns the B Mail face value and is also a tongue-in-cheek reference to snail mail. The common kingfisher was chosen for the A Mail value. These magnificent birds build their breeding burrows in vertical or slightly overhanging mud or sand walls near to bodies of water. Common kingfishers work together in their pairs to dig burrows of up to a metre in length. Contrary to popular belief, bumblebees do not make honeycombs. Instead, they build nests in locations such as abandoned rodent nests, which can be found up to 1.5 metres below the ground. The stamp design depicts various wax chambers for eggs and larvae at different stages and wax cells with reserves of honey. Finally, the hazel dormouse lives in nests found in low undergrowth. These nocturnal animals sleep during the day. To save energy, they enter a state of torpor for a few hours.