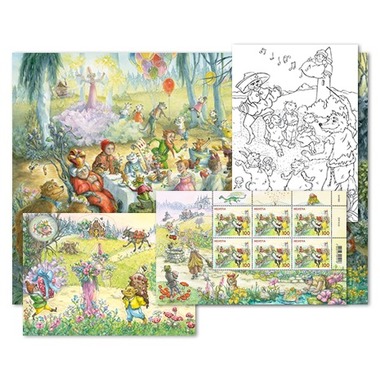 Other products of Fairy tales

The pair of "fairy tale" motifs on two sheetlets illustrate a subject which will enchant children and adults alike. The stamps, and above all the sheet, are covered in countless well-known figures, reminding many an adult of their own childhood. A host of figures, such as the Valiant Little Tailor, Cinderella, the Ugly Duckling and Little Longnose, are depicted together in a scene rich in detail. When placed side by side, the two sheetlets create an enchanted fairytale world. In the "Forest" motif, characters including the Frog King, the Town Musicians of Bremen and the witch from Hansel and Gretel are grouped around a fairy, who is telling a story. On the "Meadow" stamp, Puss in Boots can be seen playing music in the foreground, while the wolf and the kids, Mother Hulda and Rapunzel frolic in the background. Many other familiar faces can also be spotted on both sheets.