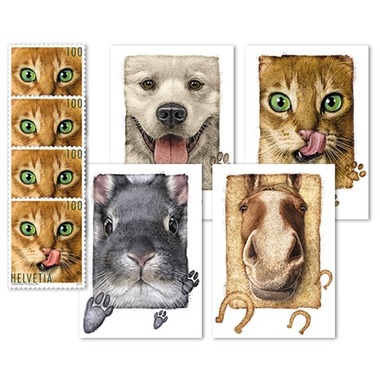 Other products of Animal friends

The delightful four-legged creatures on the new special stamps look as if they were sitting in a photo booth and were suddenly surprised by the click of the camera. The unusual portraits of popular pets aren’t just for animal lovers – they will delight everyone. The four special stamps actually feature very common and familiar animals: a house cat, a domestic dog, a rabbit and a horse. But the perspective of a traditional portrait photograph – directly in front of the camera and very close-up – is an unusual approach. The eyes, nose and mouth are familiar and remind us of own friendships with and stories about the four animals featured. Animal friends Dog Cat Rabbit Horse The directness of the photos reflects the close bond that many people feel with these four-legged friends. Stroking, cuddling and playing… unlike other creatures such as snakes and spiders, we expect to spend time in close physical proximity with the animals portrayed on the stamps.