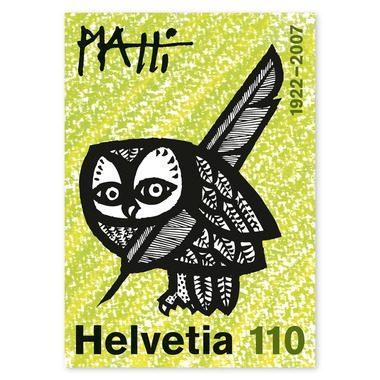 Other products of 100 years Celestino Piatti

Deliverable to: Switzerland and Liechtenstein

Celestino Piatti enjoyed a unique career in design in the 20th century: the designs created by the Swiss graphic artist and illustrator (1922–2007) have found their way into the collective consciousness. This new special stamp in large format pays homage to his graphic design and art. Designing over 6,000 book covers for the “Deutscher Taschenbuch Verlag” between 1961 and the mid-1990s raised his profile tremendously – even if few people actually knew his name. Celestino Piatti also produced remarkable work as an advertising designer, creating unmistakable posters for brands such as Rolex, Gauloises and Campari. In addition to all of those achievements, he excelled as an author of children’s books. One of his works – “The Happy Owls” – even became a bestseller worldwide. Piatti was absolutely fascinated by owls, and he featured them heavily in his work. The original drawing of his writing owl (1968) provides the thematically apt design for this special stamp. The bird is sitting on the lettering “Helvetia 110” and looks as though it has just written the word with its quill. Reference is made to Piatti’s tradition of graphic craftsmanship through the bright green “Neocolor” background, which also gives the owl a modern, contemporary look.

The cheerful stamp design is available as a limited run of 200 A1 posters on MultiArt Silk paper (135 gm2). The product is supplied unframed. The selling price of 29 francs includes shipping costs within Switzerland and Liechtenstein. Deliveries cannot be made abroad.