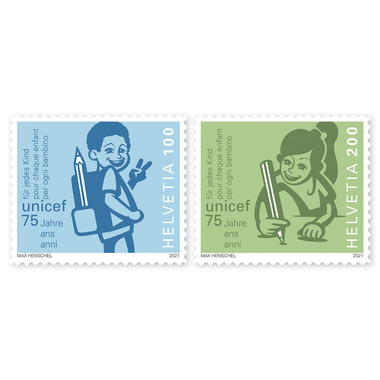 Other products of 75 years UNICEF

The United Nations Children’s Fund (UNICEF) was founded on 11 December 1946 to provide support for the countless sick, starving and displaced children in Europe, which lay in ruins after the Second World War. These special stamps focus on the UNICEF priority of education. Its full title is the United Nations International Children’s Emergency Fund, or UNICEF for short. The organization was awarded the Nobel Peace Prize in 1965, and the UN Convention on the Rights of the Child was adopted in 1989. UNICEF has undertaken countless missions in crisis-hit regions, such as Vietnam, Cambodia and El Salvador, and provided aid after natural disasters, such as the tsunami on the coasts bordering the Indian Ocean in 2004 and the earthquake in Haiti in 2010. Since 1961, UNICEF has been particularly committed to the goal of education for every child. It has also achieved a great deal of success in this movement: in the 1950s, 50 percent of all children were able to attend primary school, while the figure now stands at over 90 percent. However, half of school-leavers can barely read and write properly – a situation exacerbated by the COVID-19 pandemic. 1.6 billion children in over 190 countries were affected by school closures last year. 168 million girls and boys had no access to education for a year. And 463 million children are excluded from digital learning. This is why UNICEF’s activities remain vital. The two special stamps marking the UNICEF anniversary focus on the theme of education for every child.