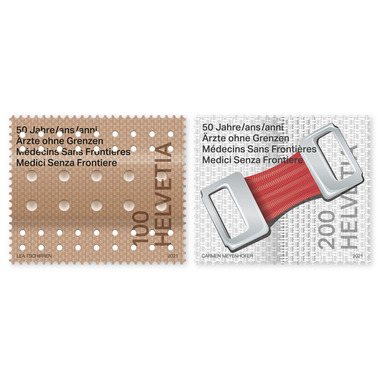 Other products of 50 years Doctors Without Borders

50 years ago, a group of doctors and media professionals founded the charitable organization Doctors Without Borders in response to the famine in Biafra, which had been caused by civil war. Two remarkable special stamps have been issued to mark the anniversary. Doctors Without Borders has grown continuously since it was founded in Paris in 1971. A Swiss section was established in Geneva in 1981; this is now one of the organization’s five operational centers. Doctors Without Borders was awarded the Nobel Peace Prize in 1999. The organization provides emergency medical aid for victims of armed conflict, epidemics or natural disasters who have no access to healthcare provision – and this aid is provided regardless of ethnicity, religion, political beliefs or gender. The activities performed by Doctors Without Borders are always based on the principles of neutrality and impartiality. The two special stamps depict two frequently used medical products familiar to all Swiss people: an adhesive plaster and a bandage clip. Special coatings are used for both stamps, accentuating their impact.