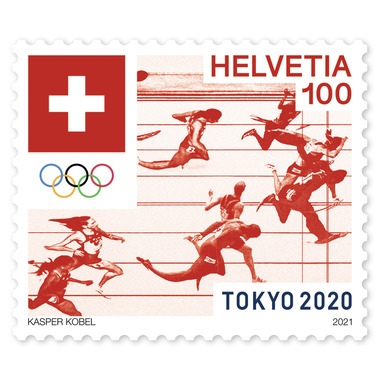 Other products of Summer Olympic Games 2021

Looking ahead to the Summer Olympic Games in Tokyo, Swiss Post has created a special stamp in conjunction with Swiss Olympic. The stamp aims to put the Swiss public in the mood for the major sporting event in Japan. On 23 July 2021, the long wait for the Summer Olympic Games in Tokyo will finally be over: over 100 elite Swiss athletes are set to parade around the Olympic Stadium during the opening ceremony in Japan’s capital and then compete for places on the podium until 8 August. The major event is being held a year later than scheduled, after the global spread of coronavirus forced the organizers to postpone the Games. But that only makes the anticipation of “Tokyo 2020ne” even more exciting! To get Switzerland in the right spirit for the 32nd Olympic Games, Swiss Post is issuing a special stamp in conjunction with Swiss Olympic, the National Olympic Committee. It was created by Kasper Kobel, a graphic designer from Burgdorf, and shows a classic photo finish. The sheetlet embraces the Olympic values of “Excellence, Friendship and Respect” and features the landscape and writing of the host nation Japan.