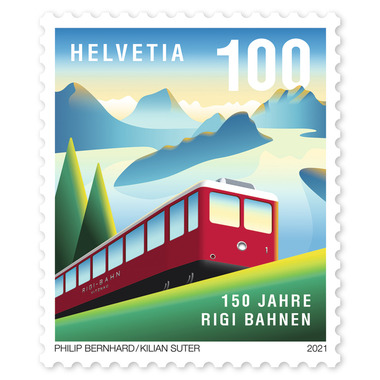 Other products of 150 years Rigi Railways

The Rigi is one of Switzerland’s leading tourist attractions. Located in the center of the country, the Queen of the Mountains can be reached by several railways nowadays. Europe’s first mountain railway opened 150 years ago. The idea was doggedly pursued by its creator Niklaus Riggenbach, the engineer who designed the railway. After patenting his invention of running trains up inclines using a cogwheel system in France in 1863, more and more people put faith in his plan. On 21 May 1871, the Vitznau-Rigi Railway was officially opened as Europe’s first mountain railway. The special stamp created to mark the 150th anniversary shows the famous view from the Rigi over Lake Lucerne and the magnificent peaks of Stanserhorn, Bürgenstock and Pilatus. Traction unit no.1, depicted in red, is typical of Rigi Railways’ rolling stock and is travelling on the anniversary route. The designers from “Büro Nord” in Küssnacht am Rigi were able to gain inspiration for their design literally by looking out of the window.