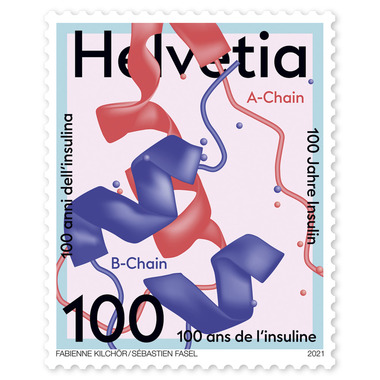 Other products of 100 years insulin

The Swiss Diabetes Foundation – alongside all diabetes organizations in Switzerland and other specialist bodies – is celebrating the 100th anniversary of the discovery of insulin. To mark the occasion, Swiss Post is also issuing a special stamp dedicated to this vital hormone. Until 1921, being diagnosed with type 1diabetes meant a death sentence. People suffering from this disease usually died within a short space of time. The discovery of insulin, which was mainly thanks to research carried out by the Canadian doctor Frederick Grant Banting, was a groundbreaking achievement on par with the discovery of antibiotics. From this point, it was finally possible to provide diabetics with life-saving treatment. Some patients now live with diabetes for over 60 years and can lead independent lives – all thanks to insulin. What is insulin? The hormone insulin forms in the pancreas of a healthy person and plays a key role in metabolic processes. It ensures that any sugar extracted and transferred to the blood during digestion is channeled to the cells of the body. Here, the sugar molecules are needed to produce energy. Without insulin, the sugar would remain in the blood, and there would be a shortage in the cells. The image on the stamp shows the tertiary structure of insulin, depicted as a3D model. It is an illustration of the insulin molecule in the form of a band model, in which parts of the inner structure of the two amino acid chains can be seen. These resemble garlands. What’s more, the image can be animated with thePost-App. Even the first-day cancellation picks upon the theme. It depicts insulin’s effect on the body using a simple miniatureinfographic.