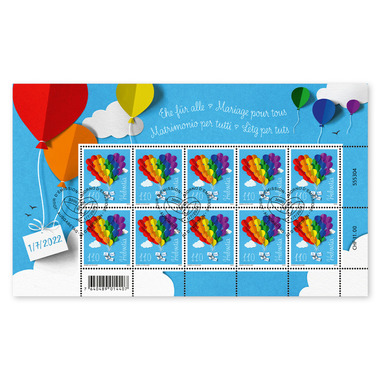 Sheet «Marriage for all», self-adhesive, cancelled

Other products of Marriage for all

On 26 September 2021, Swiss voters said “yes” to the ”Marriage for all” initiative. Swiss Post is commemorating this decision with a special stamp. It was issued on 1 July 2022, the day on which the new law came into force.

According to the website of the “Marriage for all” committee, the LGBTIQ+ community* in our country numbers some half a million people. The fact that everyone will be allowed to marry from this summer onwards constitutes another milestone on the road to equality. Although homosexual acts were decriminalized as early as 1942, it was not until 1 January 2000 that discrimination on the basis of sexual orientation was prohibited under constitutional law. The Same-Sex Partnership Act was introduced in 2007, allowing the registration of same-sex partnerships. And from 1 July 2022, marriage is now also possible.

The design of the traditional or digital stamps shows balloons in the colours of the familiar rainbow flag rising into the sky. Releasing balloons is a typical custom at many weddings, with the cards they carry generally sending congratulations to the new couple far and wide. Fittingly, the cards for the design say “Yes” in all four national languages.

* LGBTIQ+ is an acronym standing for lesbian, gay, bisexual, transgender, intersex, queer and all other people who feel they belong to the queer community. Used as an adjective, the term “queer” refers to things, actions or people that diverge from the norm.