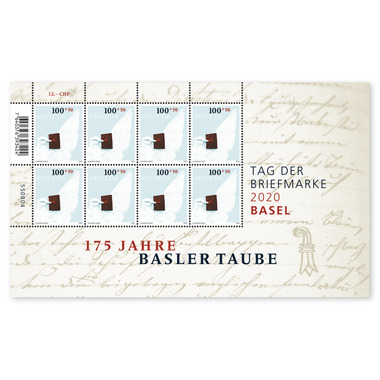 Other products of Stamp Day 2020 Basel

Not only is it one of the most extraordinary stamps in the world, it’s also one of the most beautiful: the Basel Dove, or the “Basler Dybli”, as it has been widely known for some time. This year, it is celebrating its 175th anniversary, and a special stamp with surcharge has been issued to mark the occasion. In 1845, the architect Melchior Berri was commissioned by Johannes Bernoulli, the head of the postal organization in Basel, to design a postage stamp – known at the time as the “Franco-Zettelchen”. He opted for the same motif for his stamp that he had used three years earlier for the design of the Basel letter boxes – a white dove with a letter in its beak. After the issue of the Penny Black in the UK, the stamps of the cantons of Geneva and Zurich and three stamps in Brazil, Basel was the fifth issuer of stamps. And the “Basel Dove”, printed in Frankfurt, had several special features: to protect it against forgery, the dove was produced using relief printing. It was also the world’s first multicoloured stamp. Things initially went awry, as the background was green in the first issue – and this did not go down well with the commissioner. It was only at the second attempt that the stamp received its blue background. The green variant is extremely valuable today, even though it never even entered circulation.