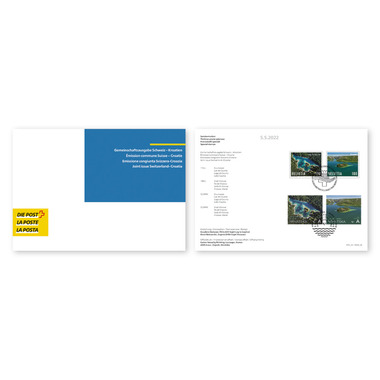 Other products of Joint issue Switzerland–Croatia

Croatia isn’t just one of the most popular holiday destinations for Swiss people – it’s also a major trading partner in south-eastern Europe. The strong relationship between the two countries is founded on Switzerland’s commitment to humanitarian aid and reconstruction during and after the war in the Balkan state. Today, Switzerland is the second home of many Croatian expats. The trade partnership between the two countries has existed for 30 years. The subject of lakes was selected for the joint stamp issue project. For their design, the Croatians selected a widening of the River Krka, in the middle of which Visovac Island is found. It’s 200 metres long and has been inhabited since the 14th century. The smallest book in the world, containing the Lord’s Prayer in seven languages, and a valuable copy of Aesop’s fables are kept on the island. Both are part of a collection of monastic treasures assembled by Franciscan monks. Switzerland chose Lake Cauma near Flims, which also has a very picturesque – albeit slightly smaller – island. The Romansh dialect Sursilvan, in which the lake is called “Lag la Cauma”, was intentionally used in the name.