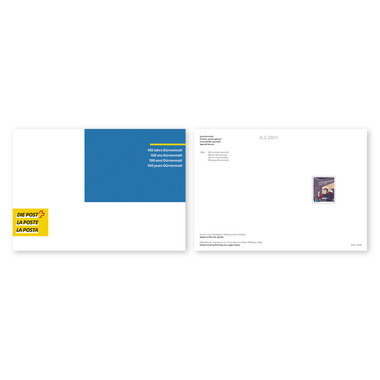 Other products of 100 years Dürrenmatt

Friedrich Dürrenmatt, who died in 1990, would have celebrated his100th birthday on 5 January 2021.Over 30 years after his death, his works are still read, interpreted, discussed and not least performed on theatre stages around the world. The Visit, The Judge and His Hangman, It Happened in Broad Daylight and The Physicists – this short list alone provides an idea of Friedrich Dürrenmatt’s significance. He is undeniably one of the most significant authors of the20th century in the German-speaking world. His works take Switzerland to all corners of the world. Dürrenmatt’s novels are studied at schools and universities, and his plays are regularly found on the programmes of small and major theatres al ike.The special stamp shows Friedrich Dürrenmatt in a studio setting. The room contains items that are related to his writing but also express his character traits clearly. It’s certainly no coincidence that his cockatoo Lulu is there…The special stamp also uses a variety of colours. This represents Dürrenmatt’s visual art, which, while less well known, was another lifelong form of artistic expression. His visual artwork has been on display since 2000 at the Centre Dürrenmatt Neuchâtel (CDN), while his literary legacy is to be found at the Swiss Literary Archives (SLA) in Bern and can be viewed by the public. The SLA and CDN are both part of the Swiss National Library.