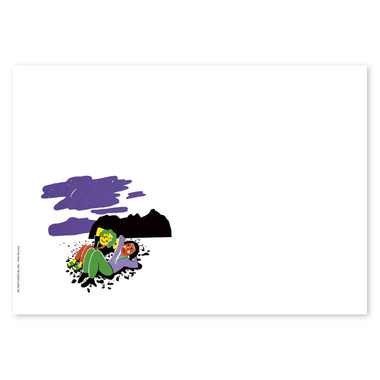 Other products of National Jamboree

BuLa – all Swiss guides and scouts will be familiar with this expression, and it’ll immediately rekindle memories of the smell of a campfire, friendships and guitar songs. “BuLa” is the Swiss Guide and Scout Movement National Jamboree.

It only takes place once every 14 years on average. This event provides members of the guide and scout movement in Switzerland with the opportunity to get together with members from other regions who speak different languages. In 2022, it will be hosted by Goms. Around 30,000 scouts and guides are expected to attend and will set up a gigantic campsite. Adopting the slogan “mova”, the jamboree will be all about movement.

Swiss Post is proud to support BuLa as a main partner and to bring together Switzerland and its scouts for two eventful weeks, helping to promote interaction that bridges language barriers, regions and entire generations.

A competition was held for the design of the special stamp. It was won by the team that had previously designed the jamboree’s graphic identity. In the image, five young people are sitting around a campfire – a place symbolizing a sense of togetherness. There’s singing, and stories are told.