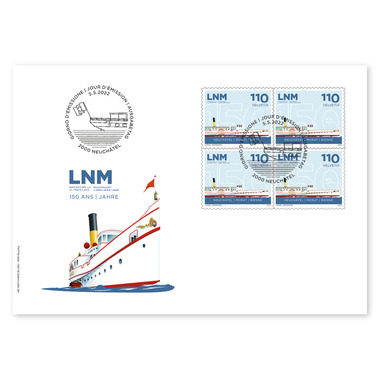 Other products of 150 years LNM Navigation on the Three Lakes

Cudrefin, Estavayer-le-Lac, Portalban, St-Aubin, Vaumarcus – they may sound like holiday destinations, but are, in fact, among the 30 ports served by LNM Navigation SA. The shipping company is celebrating its 150th anniversary. LNM doesn’t just operate on Lakes Neuchâtel and Murten, but also provides a route to Bienne in collaboration with its counterpart Bielerseeschifffahrt. It was founded in 1872 after a merger between the Société fribourgeoise de navigation in Estavayer-le-Lac and the Société moratoise de navigation à vapeur in Morat. With the major ports in Yverdon and Bienne, four cantons were connected, while also linking Western Switzerland with the German-speaking Swiss Plateau across the Aare. Goods were initially transported, but this soon became of secondary importance. Instead, passenger transport took over – numbers are still high now but almost 250,000 passengers a year were travelling before the pandemic. Today, LNM has a fleet of eight ships, mostly diesel-powered, which can carry between 200 and 560 passengers. The jewel in the crown is the DS Neuchâtel, a steamboat built in 1912 and carefully renovated between 2010 and 2013. This ship also adorns the special anniversary stamp.