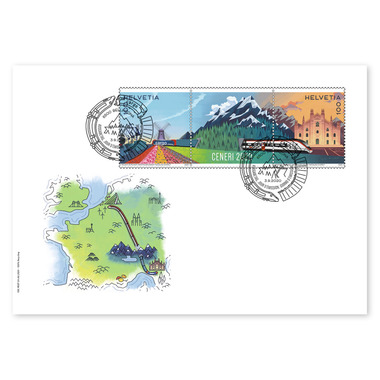 Other products of Ceneri 2020

The opening of the Ceneri Base Tunnel in December 2020 will mark the completion of the New Rail Link through the Alps (NRLA), turning the long-held dream of a flat rail link through the Alps into reality. The NRLA provides Switzerland with modern, high-performance rail infrastructure on Europe’s north-south corridor – and an environmentally-friendly alternative to road transport and travel. The opening of the Ceneri Base Tunnel is not just the final part of the Rhine-Alps corridor, an epic feat of engineering, but also a symbol of northern and southern Europe moving closer together. The design of the special stamps highlights this aspect in particular. On the left, a freight train is travelling through the Netherlands. On closer inspection, its destination can be made out – the port of Rotterdam. On the right, a passenger train is arriving in Milan, represented by the world-famous cathedral. The two special stamps are linked by a gutter which shows the Ceneri Base Tunnel. Here the Alps are not a barrier between north and south, but are instead depicted as nature – an allusion to the climate-friendly mobility that the tunnel promotes.