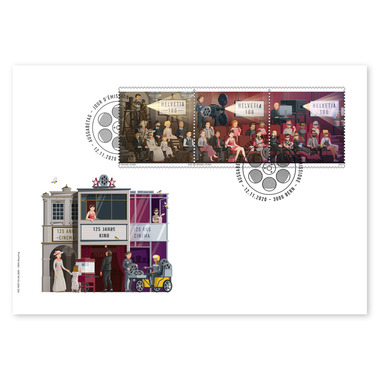 Other products of 125 years cinema

On 22 March 1895, the Lumière brothers unveiled a sensational achievement in Paris: along with their cinematographers, they brought motion pictures to the big screen. In December of the same year, the first public film screening took place in front of a paying audience – and cinema was born. Cinema has undergone a huge transformation over its 125-year history, as is illustrated by the three special stamps produced as a se-tenant. A scene with the projector used by the Lumières is shown on the left, old-style film reels can be seen in the middle, while a digital 3-D experience is shown on the right. The cinema audience wear the latest fashions from the particular period. The typography shows the lettering of the day, from an easel, to individually placed letters and finally a display on a screen. In Switzerland, the development of cinema is closely associated with Jean Speck. In 1899, he opened the “Panoptikum” in Zurich, a cabinet of curiosities and machines and, in 1912, he opened a cinema exclusively dedicated to film, which he claimed was the first in Switzerland. Other sources indicate that the Radium in Zurich and the Fata Morgana in Basel (both 1907) and the Lumen in Lausanne (1908) were the nation’s very first cinemas.