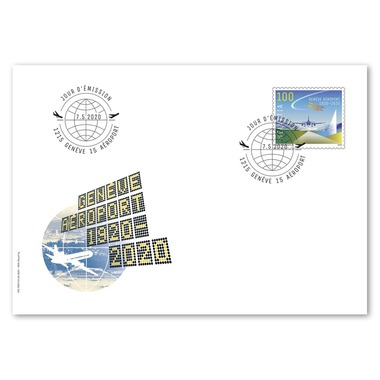 Other products of 100 years Geneva Airport

Geneva International Airport was officially inaugurated in 1922 with the first international air route of Geneva–Dübendorf–Nuremberg. But its history began in 1920, when the Canton of Geneva decided to acquire a suitable plot of land between Cointrin and Meyrin. The airport’s importance increased rapidly. The wooden hangars were soon replaced by steel buildings, and by 1937 Geneva had the first concrete runway in Switzerland. In 1946, it was part of the first intercontinental air route, which flew from New York to Cairo via Geneva and Rome. By the end of the 1940s, Geneva was not only Switzerland’s leading airport for freight transport, but also the country’s number one in terms of passenger numbers. With over 100 European and more than 20 intercontinental destinations, the airport is now the undisputed number two in Switzerland. Thanks to its many international organizations and the neighbouring Palexpo exhibition center, Geneva has key locational benefits. The motif of the commemorative stamp, which is rich in formal and colour contrast, not only depicts a modern-day passenger aircraft alongside a plane from the pioneering days, but also features links to the region, with the runway embedded amidst the Alps and the inescapable Jet d’Eau.