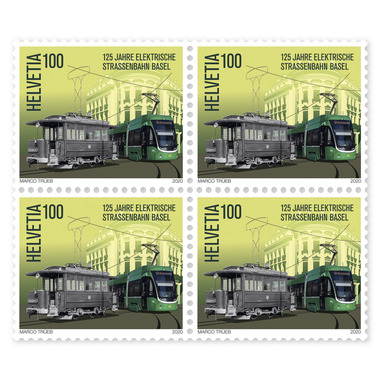 The first electric tram began running in Basel 125 years ago. Much has changed since – but some things have remained the same. While horse-drawn trams had been running since 1875, the electric “Basler Strassenbahnen” (BStB) – the first tram operated by a government authority in Switzerland – was launched on 6 May 1895. When the line was first put into operation, it ran from the central railway station over the Middle Bridge to the old Badischer Bahnhof station on the Riehenring, which is now the exhibition center. The stamp features the very first electric tram in Basel, as well as the Flexity Tram, which is currently in use. The Bankverein building can be seen in the background. The building, as well as the nearby tram stop, still exists today. It was an important location right from the outset and is now served by no fewer than seven lines, five of which are operated by the Basler Verkehrs-Betriebe (BVB). The motif was created by Basel-based graphic artist Marco Trüeb, who has already designed various stamps, including most recently the special stamp to mark the 1,000th anniversary of Basel Cathedral.