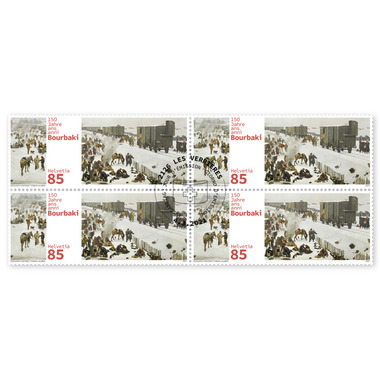 Other products of 150 years internment of Bourbaki’s army

Between 1 and 3 February 1871, 87,000 men and 12,000 horses in the French army crossed the Swiss border at Les Verrières, Sainte-Croix, Vallorbe and Vallée de Joux and surrendered their weapons and ammunition. The members of this group, known as our baki’s army, were then interned in Switzerland. The commemorable event happened after France had suffered defeats in the Franco-Prussian War (1870–1871).General Charles Denis Sauter Bourbaki attempted to withdraw his troops to Lyon but was forced back to the Swiss border. After a request, the Federal Council approved the internment of the troops. Over the following days, the Swiss soldiers stationed in the area and local residents provided aid in a remarkable and exemplary fashion. And the recently founded Swiss Red Cross was deployed for the first time. The nation’s biggest humanitarian effort was captured ten years later by Edouard Castres in a painting measuring 112 metres long and 10 metres high (originally 14 metres high). The “Bourbaki Panorama” tondo is located in the building of the same name in Lucerne. This painting’s spectacular format is also reflected in the design of the special stamp. Selected sections depict French soldiers being nursed and fed by local people. The train carriages used to transport the troops can be seen alongside them. The image is divided by a white strip whose typographic elements provide a modern contrast to the painting. The colour scheme is also reminiscent of the Red Cross. But the full impact of the stamp comes from augmented reality, which enables stamp owners to view the remarkable tondo in almost lifelike quality. This unique visual experience can be enjoyed via the Post-App and smartphone.